‘Twas the Night After Christmas 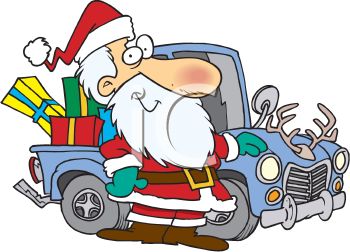 ‘Twas the night after Christmas and all through the trailer, the beer had gone flat and the pizza was staler. The tube socks hung empty, no candies or toys and I was camped out on my old Lay-Z-Boy.

The kids they weren’t talking to me or my wife, the worst Christmas they said they had had in their lives. My wife couldn’t argue and neither could I, so I watched TV and my wife, she just cried.

When out in the yard the dog started barkin’, I stood up and looked and I saw Sheriff Larkin. He yelled, “Roy I am sworn to uphold the laws and I got a complaint here from a feller named Claus.”

I said, “Claus, I don’t know nobody named Claus, and you ain’t taking me in without probable cause.” Then the Sheriff he said, “The man was shot at last night.” I said, “That might have been me, just what’s he look like.”

The Sheriff replied, “Well he’s a jolly old feller, with a big beer gut belly, that shakes when he laughs like a bowl full of jelly. He sports a long beard, and a nose like a cherry.” I said, “Sheriff that sounds like my wife’s sister Sherri.”

Well I started to lie then I thought what the hell, it wouldn’t have been the first time that I’ve spent New Years in jail. I said, “Sheriff it happened last night about ten, and I thought that my wife had been drinking again.”

When she walked in from work she was as white as a ghost. I thought maybe she had seen one of them UFO’s. But she said that a bunch of deer had just flown over her head, and stopped on the roof of our good neighbour Red.

Well I ran outside to look and the sight made me shudder, a freezer full of venison standing right on Red’s gutter. Well my hands were a shakin’ as I grabbed my gun, when outta Red’s chimney this feller did run.

And slung on his back was this bag over flowin’. I thought he stolen Red’s stuff while old Red was out bowling’. So I yelled, “Drop fat boy, hands in the air!” But he went about his business like he hadn’t a care.

So I popped a warning shot over his head. Well he dropped that bag and he jumped in that sled. And as he flew off I heard him extort, “That’s assault with intent Roy, I’ll see ya in court.”

The above document was written by Jeff Foxworthy.